Which ferry is best for families in Greece? 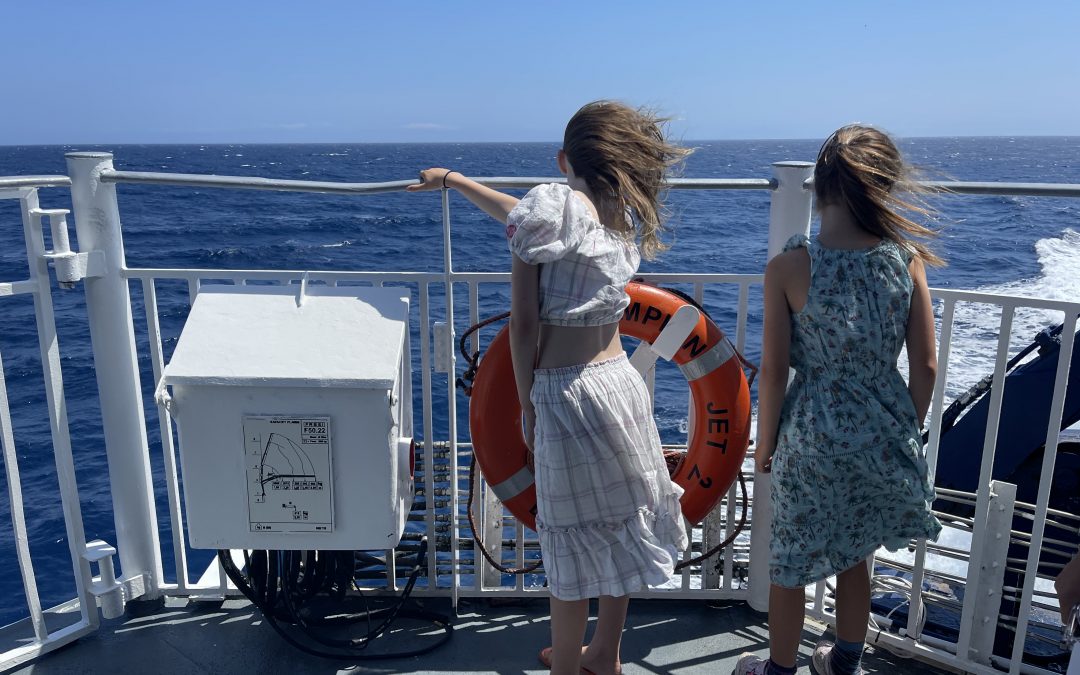 We tried two different ferry companies in the Cyclades in Greece; in this post I’m sharing our experience and giving you a direct comparison so you can choose for yourself which ferry is best for families in Greece.

Island hopping in Greece in kids

When you’re island hopping in Greece the best way to get around is by ferry. You won’t want to be flying from island to island for a number of reasons.

Benefits of the ferry over flying around Greece:

The ferry is cheaper.

The ferries are more frequent.

When you factor in check in times and waiting at baggage reclaim the ferry is much quicker.

Which ferry is best for families in Greece?

There are a number of different ferry companies operating in the Greek islands. They use the same ports and it is worth noting the ports seem scary, busy and chaotic. But they’re actually quite straight forward. There are different queues, labelled with the destination of the boat you’re waiting for. Eating in that queue and you’ll be ushered on to your boat when the time comes. You’ll be told to arrive an hour in advance. I’ m not going to tell you otherwise, but we arrived an hour early for our first ferry and then decided to go get a coffee rather than wait in the holding bay for an hour.

We used two different ferry companies which island hopping in Greece with kids – and they are very different!

We used the largest, cheapest and slowest ferries Blue Star Ferries. And we used one of the smaller, fast and expensive ferries SeaJets.

I cannot fault Blue Star Ferries in Greece. We travelled with them from Paros to Naxos.

Check in online was excellent. I could immediately save our boarding cards to the ‘Wallet’ on my phone. This made boarding so much easier.

The boarding process was fairly standard (across the Cyclades at least). We queued as the ferry arrived, and everyone piles on board. Bags are left in the luggage area before passengers head upstairs.

We travelled on the Blue Star Delos and on this vessel there was a lift for the buggy. We were helpfully directed to the lift while others queued for the stairs.

Boarding cards are checked as you head upstairs or up in the lift. Not before getting on the boat. While we were advised to have passports ready they were not checked.

Once on board there were a number of bars and cafes and you could choose to sit almost anywhere on board. This worked so nicely for the kids, there were a range of seating options and plenty of spaces that felt like you were hanging out at a cafe rather than seated formally in rows.

Despite high winds, the crossing was fairly smooth and comfortable.

The boat map given via email stated there was a kids corner but there wasn’t one on our vessel.

We travelled on SeaJets, Champion Jet 2 from Naxos to Athens. This is a longer journey. It can take over 5hours if you use a slower ferry but on SeaJets it’s just 3 hours 30 minutes. Which is why we chose SeaJets. They’re slightly more expensive but this ferry allowed us enough time to enjoy Athens when we arrived before we flew out the following morning.

The online check in for SeaJets was similar to Blue Star Ferries. I found the Blue Star website slightly more user friendly. I couldn’t figure out how to save my boarding cards to my wallet so this time I screenshot the QR codes so that I could easily swipe through them to be scanned upon boarding.

Boarding is fast! This vessel doesn’t hang around long at the port so be ready with your boarding cards.

As with Blue Star you board, drop your luggage and then head to the stairs to show your boarding card.

This is where things got a bit challenging for us. The ship started moving long before everyone was safely in their seats. People were queuing in the stairwell being thrown from side to side. We were standing in the car park wondering how we would get the buggy up the stairs and the kids were clinging on to us for dear life, feeling quite scared by the motion.

I suggested to Rich we go up the car parking ramps to get to a higher level to reduce the number of stairs we needed to carry the buggy up and we found that by doing this we could access the passenger area without steps.

We were called to the front of the queue as we were travelling with small children and I’m glad we were, with the boat rolling from side to side it didn’t feel particularly safe.

We finally found our allocated seats which thankfully were by a window. If you’re struggling with motion sickness a window seat is definitely better.

We don’t suffer with seasickness usually. None of us have ever been unwell on a boat but on this journey we did have to make a special effort to eat and drink regularly to stabilise our tummies, and stare at the horizon from time to time.

Seating is allocated on this ferry and it feels a little more like travelling on an aeroplane. You really do generally stay seated. Getting up to go to the bar or loo was challenging. The kids felt really unsteady on their feet. There was a small ‘children’s area’. What you see in the photo is all of it. It was a patch of carpet with pretty walls around it!

But the bar serves the best baklava I have ever had. So you know … swings and roundabouts 😂

Choosing which ferry company should you use in Greece

Which ferry is best for families in Greece? If you’re short on time, SeaJets will get you where you need to go the fastest. But it won’t be the most comfortable ride and it will cost you more.

Blue Star Ferries are slow and steady. They’re also cheaper. On a short ride, such as Paros to Naxos it’s not going to take that much longer. You might as well save your euros, avoid the motion sickness and go on a steadier boat.

We use cookies on our website to give you the most relevant experience by remembering your preferences and repeat visits. By clicking “Accept All”, you consent to the use of ALL the cookies. However, you may visit "Cookie Settings" to provide a controlled consent.
Cookie SettingsAccept All
Manage consent

This website uses cookies to improve your experience while you navigate through the website. Out of these, the cookies that are categorized as necessary are stored on your browser as they are essential for the working of basic functionalities of the website. We also use third-party cookies that help us analyze and understand how you use this website. These cookies will be stored in your browser only with your consent. You also have the option to opt-out of these cookies. But opting out of some of these cookies may affect your browsing experience.
Necessary Always Enabled
Necessary cookies are absolutely essential for the website to function properly. These cookies ensure basic functionalities and security features of the website, anonymously.
Functional
Functional cookies help to perform certain functionalities like sharing the content of the website on social media platforms, collect feedbacks, and other third-party features.
Performance
Performance cookies are used to understand and analyze the key performance indexes of the website which helps in delivering a better user experience for the visitors.
Analytics
Analytical cookies are used to understand how visitors interact with the website. These cookies help provide information on metrics the number of visitors, bounce rate, traffic source, etc.
Advertisement
Advertisement cookies are used to provide visitors with relevant ads and marketing campaigns. These cookies track visitors across websites and collect information to provide customized ads.
Others
Other uncategorized cookies are those that are being analyzed and have not been classified into a category as yet.
SAVE & ACCEPT